Cr(VI)-free coatings and pretreatments for the aerospace industry

As part of the Clean Sky 2 project of the Horizon 2020 research program, various commercial pretreatments, primers and top coats were analyzed at Fraunhofer IPA with regard to their suitability for aircraft coating. The main focus was on corrosion protection and the adhesive strength of the coatings. In addition, properties such as temperature and condensation resistance were tested as well.

Cr(VI)-free coatings and pretreatments are needed more and more urgently in aviation, since TRGS 602 has restricted the use of strontium chromates since 1988, which are classified as CMR substances (carcinogenic, mutagenic and reprotoxic). In order to meet the requirements for occupational safety and environmental standards, chromium(VI)-free alternatives must be found and approved for use until 2024.

The corrosion protection system customary to date normally consists of a surface pre-treated substrate, a primer and a top coat. The substrate used for landing gears, landing gear housings and wheel axles in aircraft are mainly high-strength steel and aluminium alloys. These substrates are individually pre-treated. The steels are then cadmium plated or yellow chromated. Aluminium alloys are anodized, compacted (partially) using the chromic acid, sulphuric acid and tartaric acid processes, or also chromated (chromium(VI) compounds).

The selected primers are usually based on 2-component epoxy amine binders with active corrosion protection pigments such as strontium chromate. They are responsible for the corrosion protection of the coating, but also serve as adhesion promoters between pre-treatment (conversion layer) and top coat. Typical coating thicknesses are in the range of 15 to 30 µm. The top coat serves as the final protective layer and is responsible for the optical properties, UV and chemical protection as well as scratch resistance. Typical layer thicknesses are 50 – 130 µm.

A 7075 aluminium alloy was used to test pretreatments. In addition to the TSA method, three different Cr(III)-containing conversion layers were tested. The application was carried out at the IPA by electrochemical deposition or immersion. In the case of TSA anodisation, various deposition parameters (temperature, voltage) were used. In the last step, the best versions were tested with a primer for their corrosion protection in the neutral salt spray test.

For the paint systems, initially a study applying possible commercially available primers was done. The focus was on modern, environmentally friendly paint systems, such as water-based or high-solid coating materials based on two-component epoxy. These are cost-effective, resource-saving and energy-saving to apply. These new primers were compared with the Cr(VI)-containing reference system. The coating materials were applied by spray application. Four steel and two aluminium pre-treatment versions were used for the tests with a total of five new primers and a state-of-the-art sample. Subsequently, three of the most promising primers were tested again, this time in combination with a top coat. Three High-Solid 2K-PU top coats commonly used in aviation were applied. This results in a total of nine paint combinations on six substrate variants.

Tests of pretreatments and coatings

During the preliminary investigation, the pre-treatments were deposited on aluminium substrates. It was found that the different versions have strong differences in the properties. The best corrosion protection was provided by the TSA pretreatment, followed by a two-stage Cr(III)-containing conversion treatment applied by immersion. Therefore, for the next step, the following samples were coated with a primer and their corrosion protection capacity was tested by salt spray and filiform corrosion tests:

Especially the version 1 and 2 showed good results even after 3000 h neutral salt spray test, while sample 3 showed early blister formation. In the filiform test, pre-treatment 3 also showed the worst performance. For sufficient corrosion protection, the electrochemically deposited anodizing layer appears to be best suited in this case. The most promising candidates for further trials were also identified for the primers. The researchers first determined properties in the unloaded state, such as adhesive strength, scratch resistance, elasticity, shade, flexural strength, but also resistance to the effects of heat, cold or temperature changes, resistance to moisture, corrosion protection and chemical resistance.

In further tests, the best three primers were used to produce coating structures with three top coats each. It was shown that the combination of pre-treatment / primer / top coat had a strong influence on the results. In deforming tests, for example, a top coat in particular tended to cause the coating to fail, regardless of the primer. The substrate used also appears to have a decisive influence on corrosion resistance. For example, one steel substrate showed bubble formation in many tests, which could be attributed to the pre-treatment used, and the compacted aluminium substrates all showed adhesion problems in the corrosion tests. All systems show advantages and disadvantages, but the coating properties are relatively close to each other. The optimum system could not be identified after these tests.

This research project was funded by the European Union as part of the Horizon 2020 research and innovation programme under the EU funding agreement 807083 CS2-AIR-GAM-2018.

IPA would particularly like to thank our industrial partner Liebherr-Aerospace Lindenberg GmbH for the excellent cooperation. 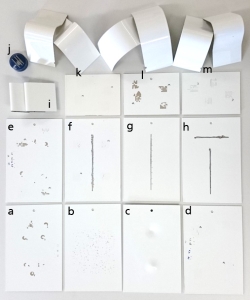