As European Coatings reports, materials scientists at the UCLA Samueli School of Engineering and colleagues in China have developed a coating that prevents ice from forming. The new coating could be a cost-effective solution to the problem of critical parts on aircraft wings freezing. It function is inspired bay a natural mechanism that keeps blood from freezing in several species of fish that live near Antarctica. The new coating could be an inexpensive and versatile solution for preventing critical parts on airplane wings, outdoor pipes and other equipment from freezing over in cold temperatures. In general, the ice formation processes on solid surfaces are complex and diverse, which makes it a daunting challenge to design an icephobic material that is functional under different icing conditions in a complex varying real-life environment.

The scientists have now reported on a multifunctional anti-icing platform based on polydimethylsiloxane (PDMS)-grafted polyelectrolyte hydrogel, which can simultaneously inhibit ice nucleation, prevent ice growth, and reduce ice adhesion. The properties of interfacial water can be controlled by tuning the synergy of hydrophobicity and ion specificity, in contrast with the conventional wholly hydrophobic bulk systems (e.g., PDMS). This provides us a promising route to integrate various icephobic advantages into one material. The controllability of interfacial water grants the polyelectrolyte hydrogel coating high performance in inhibiting ice nucleation (ice nucleation temperature lower than −30°C), preventing ice propagation (ice propagation rate lower than 0.002 cm2/s), and reducing ice adhesion (ice adhesion strength lower than 20 kPa). The study has been published in Matter. 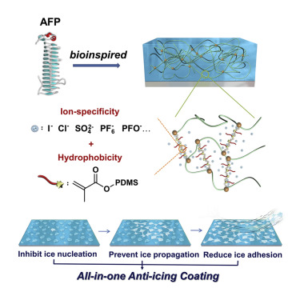