In the recently completed BMWi project “Low Drag Aircraft in Operation – LDAinOP” the Fraunhofer IFAM from Bremen in cooperation with Airbus and Lufthansa Technik has developed an optimized test method for aircraft coatings. This test method simulates the special challenges facing the coating materials, such as a temperature range of up to 120°C between -40°C and 80°C. The test method is based on a combination of two methods. The test showed that a specially developed primer from Mankiewicz is suited to ensure the protection of aircrafts.

The primer is suitable for use on fiber-reinforced or carbon-fiber-reinforced plastics (CFRP). During the inspection of aircraft components, cracks were detectable at various points on the painted CFRPs. In order to investigate the causes and identify suitable primers to avoid them, the Fraunhofer IFAM`s experts examined various relevant influences. The conditions were simulated in an accelerated test procedure in the laboratory. In addition, IFAM employees analyzed the mechanical properties of the coating and developed concepts to reduce cracking of the paint layers on CFRPs.

The typical structure of an aircraft coating is based on a polyester or epoxy-based pore filler. Then an additional filler is applied, e.g. 2K EP. This forms the basis for an optional antistatic coating, for example of 2K PUR, mixed with carbon. This is followed by coating with 2K EP Primer, which is protected by a 2K PUR topcoat. The total film thickness of the joined layers is between 100 – 350 µm. It should also be noted that after MRO preparation of the aircraft components, there are sometimes considerably more layers and higher layer thicknesses are measured. The IFAM employees sample these layer structures in their special, accelerated test procedure. Here, the typical temperature changes during flights between -40°C and 80°C, as well as the changes in relative humidity between 10% and 99% are simulated in rapid changes. This allows the test duration to be accelerated until cracking occurs. Already after one month of the climatic ring tests a crack formation could be observed. The analysis made it possible to locate the cause of crack formation in the primer layer. An intermediate coat has no influence on crack formation or crack growth.

Both the laboratory tests and statistical evaluations showed a higher probability of cracks if an epoxy-based primer was used. When investigating the mechanical properties of these substances, a slightly higher glass transition temperature and a greater difference in the modulus of elasticity were found. In order to reduce the formation and growth of cracks, a flexible PUR primer called “ALEXIT FlexPrimer 493-23” from Mankiewicz, which did not show any crack formation after the climatic tests, is suitable. This was developed especially for this challenge. The polyurethane primer is chromium-free and has 5-10 times the flexibility and elongation at break of more than 25% compared to standard primers. The coating has already been successfully tested by some MROs and Airbus. 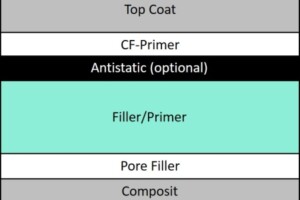